This section of our LLA website will feature different types of wildlife throughout the year.  Check back here often to learn more about the variety of birds, animals, and insects who live in and around the Leech Lake area.
​

Six species of colonial waterbirds nest on Leech Lake, including White Pelicans, Double-crested Cormorants, Herring Gulls, Ring-billed Gulls, Caspian Terns, and Common Terns.  All of these species nest in mixed colonies on Gull and Pelican Islands.  In the LLA spring 2021 newsletter, Leech Lake Reservation biologists Steve Mortensen and Tanya Roerick reported that all of these species 'are doing pretty well, except for the Common terns.  They are smaller and return to nest later so they have a hard time competing for the best nesting spots. In 2020, mainly due to high water and competition from Ring-billed gulls, no young were fledged.  Leech Lake is one of only four sites where this species nests in Minnesota.  The Caspian tern is the other species of tern that is now seen on Leech Lake.  This is the only place in Minnesota where this species has been documented to successfully nest.  In 2020, they fledged over 300 young.'
​ 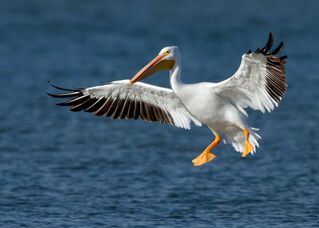 Photo credit: Manjith Kainickara
According to the Minnesota DNR, the American White Pelican is one of Minnesota's largest birds, with a length of 1.2-1.8 m (3.9-5.9 ft.) and a wingspan of 2.4-2.9 m (7.8-9.5 ft.). The bird's size, white plumage, black wing tips and outer secondaries, and large, orange bill distinguish it from any other species. Although the pelican is awkward on land, it is graceful in flight. Marsh Lake, Pigeon Lake, Lake Johanna, Leech Lake, and Lake of the Woods colonies have been nominated as Important Bird Areas , a program of the National Audubon Society.

Photo credit: Ron Plinske
​Widespread and often common inland, Herring gull adults have a gray back with black wingtips. They scavenge shorelines, mudflats, plowed fields, and the open ocean, picking up scraps wherever they can.  You’ll see them congregating in large groups with other gulls, especially around fishing boats, beaches piers and landfills. A short- to medium-distance migrant, it winters along coastal waters throughout North America and Mexico. Northern Minnesota is on the southern periphery of the Herring Gull’s breeding range, with the largest colonies occurring along the North Shore. 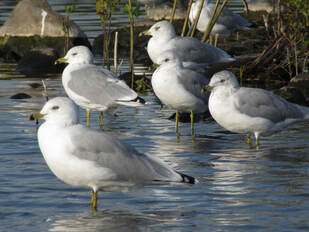 Photo credit: Ron Plinske
​Today, a widespread and common inland gull in the U.S. and Canada, the Ring-billed gull will forage along lakes, rivers and ponds, as well as plowed fields, parking lots, and parks.  Smaller than the Herring Gull.  Late migrants have been observed every winter since 1977.  While relatively common today, only one nesting pair was cited in an unconfirmed report in 1905 in Cook County, MN and another two pair seen in 1936. Recovery was slow – even in 1960, a single egg was found on Tern Island in southern Leech Lake (Dickerman and Fefebvre 1961). The small colony that began on Gull (Tern) Island, grew to 1,069 nests in 1991. As this site reached carrying capacity, the birds moved to nearby Little Pelican Island, where the number of nesting pairs reached 5,000 in 2015 (Hamilton and Cuthbert 2016). 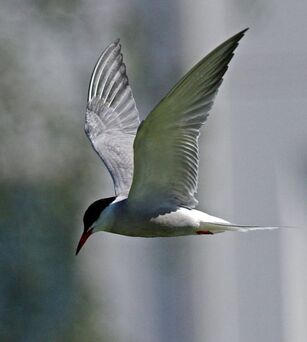 Photo credit: Julia Soinenen
​Common Terns have long, narrow, angular wings and pointed wingtips. Unlike gulls, this tern has a straight, slender bill. The tail is forked and the legs are short. Common Terns are pale gray overall with a black cap. Breeding birds have a fully black cap that extends to the back of the neck and a gray belly. They also have an orange bill tipped in black and orange legs.  In Minnesota, the Common Tern is officially classified as a Threatened Species and is designated a Species of Greatest Conservation Need by the Minnesota Department of Natural Resources. Audubon Minnesota has identified it as a Target Conservation Species.   Nesting is difficult for the Common tern on Leech, because they are smaller than other colonial birds and return to the nest later, after the best spots have been taken.  According to surveyors, in 2020, no young were fledged due to high water and competition from Ring-billed Gulls. 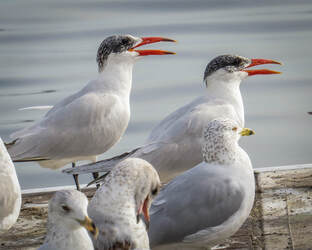 Photo credit: Ron Plinske
The largest tern in the world. A large red bill and a tail with a shallow fork, and black on the underside of primary feathers. Breeding adults have a fully black cap. Leech Lake is the only place in Minnesota where this species has been documented to successfully nest. In 2020, they fledged over 300 young. The first documented nesting attempt was reported on Gull Island on Leech Lake in 1969, however it was not successful.  Aided by conservation efforts by the natural resources staff with the Leech Lake Band of Ojibwe’s Division of Resources Management (DRM), in 2007, 13 pairs of Caspian Terns nested successfully on Little Pelican Island, just north of their original nesting attempt on Gull Island, fledging a total of 11 chicks. The birds have continued to successfully nest on the island in following years. In 2010, the colony had grown to 43 nests; in 2015, 130 nests were documented (Hamilton and Cuthbert 2016) and in 2016, 129 nests were reported (Minnesota Ornithologists’ Union 2017).  Continued efforts by the Leech Lake Band to provide and maintain suitable habitat on Little Pelican Island have been critical for Common Terns, as well as attracting Caspian Terns.
RESOURCES